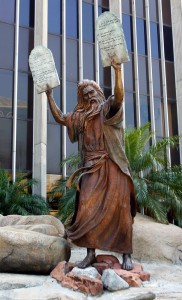 A statue of Moses carrying the tablets on the grounds of the Crystal Cathedral in Garden Grove, California is pictured August 10, 2011. The bankruptcy sale of Crystal Cathedral, the glass-walled Orange County church known for its “Hour of Power” broadcasts, has touched off a bidding war between a Roman Catholic diocese and a local university. The church’s ministry, meanwhile, has announced that its campus is not for sale and launched a pledge drive to keep the cathedral, But that is a show of opposition that could put it on a legal collision course with creditors. REUTERS/Alex Gallardo (UNITED STATES – Tags: RELIGION SOCIETY)